Sunday, the second week of December, I got chance tovisit the Niagara Falls city which is located border of the USA near theBuffalo city. We had no plan to go there but were feeling bored by sitting athome. It is winter and the temperature was below the zero marks. I was lookingfor some adventure and fun but Niagara Falls were already seen multiple timeswith the family and some guess visited before.

I was not so sure if I wanted to go there but in a short time, I was not able to find any place to visit except Niagara. Then I made the plan to go to Niagara but with some adventure flavor. I choose not to take the highway and tollway. Instead, I took the country road which will go thru small towns located in between the Brampton and the Niagara city.

It was an amazing experience. GPS took me thru small villages, towns and core country areas. I passed thru 12 different big and small towns including Niagara Falls city. We started from the middle of the Brampton, then Mississauga, Milton, Oakville, Burlington, Hamilton, Stoney Creek, Smithville, Pelham, Welland and finally reached the Niagara Falls city. The whole route without taking the highway, only link roads in the towns and country area.

I took my drone with me because I was planning record the drone video of interesting points on the run. Unfortunately, we were a little late. Due to less visibility, I was not able to record above from the ground but will not miss the opportunity next time.

The most amazing thing happened in the Stoney Creek area. At one place, I had to make a right turn. I was little distracted by the conversation and kept driving straight on the road. I realized my mistake after driving about a hundred feet. I had to make a turn. When I found an intersection where I could make U-Turn. When I was making the turn to go back at the right point, suddenly, I found a board of Gurudwara Baba Budha Ji (Sikh Temple). I was surprised and told my wife if we should go and spend some time at the Sikh Temple.

We both were agreed and turned my car towards the Gurudwara Sahib. We visited there, spent some time in the Guru Ghar and also ate the Langer. After leaving the Gurdwara Sahib, we were discussing that the mistake of not making the turn from the right place on the road was not the distraction but it was our destiny to visit the God’s place and have some spiritual time. It was not planned and we even had no idea about any Sikh Temple in the Stoney Creek area.

Finally, we reached Niagara Falls around 6:35 pm. Niagara Falls city was looking like a paradise. So many decorative lights, tourists and music. I could see everything in a new format. And the fall was like we have never seen this thing before. The scene cannot be explained in the words. We have recorded small video clips and taken some pictures which are posted in this blog. Overall, it was an amazing journey and family time. I will never forget this great experience and will explore new places to have amazing travel time. I will keep updating my blog with these interesting places. Regarding my blog, if you have any query then please contact me at    i@premdeeps.com 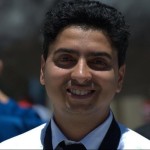